an issue of Cerebus Archive by Aardvark-Vanaheim Press 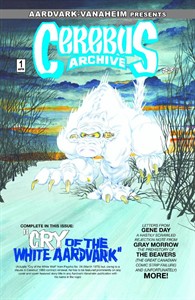 Issue description
Writer: Dave Sim
Dave Sim's Archives File Drawer #1 (1972-1979) provides the raw material for Cerebus Archive, the new light-hearted bi-monthly series from Cerebus creator Dave Sim, covering his career from 1972 to the present! It's a mortified (but tongue-in-cheek) look back by Dave Sim at the first prototype drawings of his earliest cartoon creations, The Beavers, along with his first professionally published comic-book story 'Cry of the White Wolf' (art by Stan Connerty), complete in this issue! In addition to Sim's commentary, you'll also find letters from Gene Day the year before he was accepted at Marvel Comics, a rejection letter from Gray Morrow, and a 1975 reproduction from the only comic book to feature - in one issue - the work of John Byrne, Gene Day, Frank Cirocco and Dave Sim. With six issues 'in the can' - and the creation of Cerebus as a cartoon mascot for a sword-and-sorcery/fantasy fanzine still a year away... Cerebus Archive might turn out to be Dave Sim's next 300-issue limited series! Available in two cover versions: 'Cry of the White Aardvark' or a Cerebus #1 Zombie Variant!