an issue of City of Dust by Radical Publishing 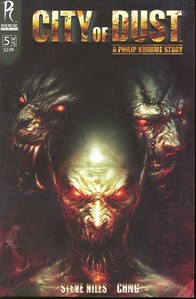 Issue description
Writer: Brandon Ch'ng Garrie Gastonny Steve Niles Zid
In a world where imagination has been outlawed and nightmares have come to life, only a single police officer, Philip Khrome, is brave enough to bring hope for the salvation of this perpetual society by rebelling against the very same system that he is trying to preserve! Acclaimed writer Steve Niles brings his debut Radical series, City Of Dust: A Philip Khrome Story, to a twisted conclusion as the fate of an entire civilization balances on the verge of destruction.