an issue of Terminator: Revolution by Dynamite Entertainment 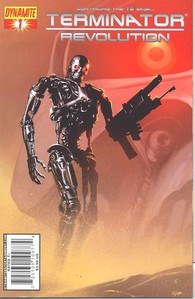 Issue not yet rated - You rated this a 0
Previous Issue Next Issue
Covers of Terminator: Revolution #1

Issue description
Writer: Lui Antonio Simon Furman
Simon Furman (W) Lui Antonio (A) Covers: Richard Isanove and Stjepan Sejic The Terminator is back as Dynamite once again puts John Connor up against Skynet and the dark future as envisioned in the classic blockbuster films! Helmed again by writer Simon Furman, joined by artist Lui (Red Sonja) Antonio and cover artists Richard (Dark Tower) Isanove and Stjepan Sejic, 'Infinities' tells a story set in the dark future of the Terminators and the present day where John Connor and his mother Sarah are on the run from the enemies sent against them from the future!