Angel: After the Fall #8

an issue of Angel: After the Fall by IDW Publishing 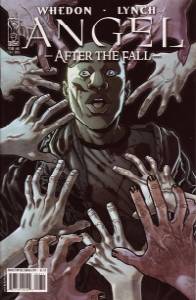 Issue not yet rated - You rated this a 0
Previous Issue Next Issue
Covers of Angel: After the Fall #8

Issue description
Writer: Tim Kale Brian Lynch David Messina Mirco Pierfederici
Angel ships bi-weekly in June! First up, Angel: After the Fall #8, concluding the stories of what happened to Angel's friends and family during their first night in hell. In this issue: Gwen begins to fulfill her destiny, Gunn begins his journey down the darkest path imaginable, and LA's citizens deal with being cast into Hell. It's the stories we've been waiting for as the sold-out smash series continues, courtesy of Joss Whedon, Brian Lynch, Scott Tipton (co-writing Gunn's chapter) and a host of dynamic artists. To hit stores June 11!