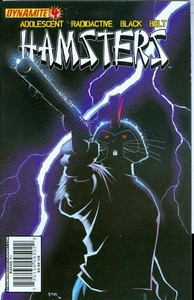 Issue description
Writer: Keith Champagne Tom Nguyen
Under the watchful eye of original series creator Don Chin, writer Keith Champagne (Countdown: Arena) is joined by artist Tom Nguyen for a comic book series unlike the world has ever seen! Ninjas! Barbarians! Huns! Monks! Hamsters! This one's got it all! Issue #4 concludes the special Hamsters revival as this opening mini-series crashes down around the Hamsters as they face off against Ghengis Khann and his own furry, not-so-friendly group of rodent @$$ kickers!