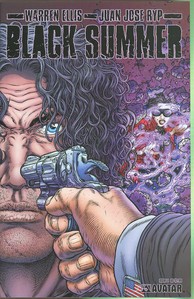 Issue description
Writer: Warren Ellis Juan Jose Ryp
This is it, Warren Ellis’ masked hero masterpiece begins its monthly run right here! With Internet buzz that is off the charts, prepare for the world to go black as Ellis unveils his all-new super-powered heroes and villains epic! With art by the genius Juan Jose Ryp, no fan of The Authority or Wanted will want to miss this bleeding-edge eight issue masterpiece. Following directly from the #0 issue, the politics of the President have forced Horus to take matters into his own blood-stained hands. But he acted on his own and now his old team is going to be hunted for the crimes Horus committed. The dangers of being a hero have taken their toll on Tom Noir. He lost a leg, and hasn’t used his powers in many years as he drowns his problems with booze. But when a man-mountain named Vince, with far more advanced powers, shows up to find out how Tom is connected to his teammate Horus, the action kicks off and the team known as the Seven Guns is thrust into chaos as an epic conflict starts to form.