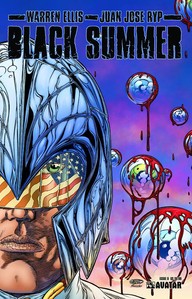 Issue description
Writer: Warren Ellis Juan Jose Ryp
This summer, the world goes black as Warren Ellis unveils his all-new super-powered heroes and villains epic that promises to be the biggest event of 2007! With art by the genius Juan Jose Ryp, no fan of The Authority or Wanted will want to miss this bleeding- edge eight issue masterpiece. This #0 features an original story that leads directly into the full-size monthly series that starts in August priced at just $2.99 per issue! When the political situation in the USA becomes more than Horus can stand, he moves to take matters into his own hands. But since not all his other team-mates aren’t so eager to throw the world into chaos, an epic conflict starts to form. And no one will be safe as the bodies start to fall.