an issue of Midnighter by DC / Wildstorm 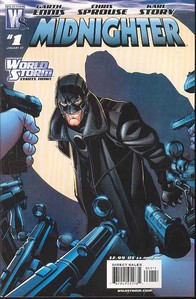 Issue description
Writer: Garth Ennis Chris Sprouse
From the pages of the Authority comes the Midnighter, the world’s most lethal weapon, in a new Worldstorm series written by Garth Ennis (PREACHER, THE BOYS) with art by the acclaimed team of Chris Sprouse & Karl Story (TOM STRONG)!

The Midnighter, returning from a mission in war-torn Afghanistan, is accosted as he enters the Carrier. Something is terribly wrong; these unseen assailants take him down too easily and then drag him though the teleportation door to an unknown location. After regaining consciousness he is given a cryptic choice: either kill a mass murderer or die!