an issue of 24 Nightfall by IDW Publishing 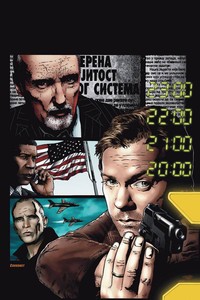 Presenting a special six-part 24 Season One prequel! In 24: Nightfall, future CTU agent Jack Bauer heads an elite Special Forces team sent to take down the mass murderer, Victor Drazen. But events in the war-torn former Yugoslavia quickly spiral out of control as the hunters become the hunted. The secrets behind Bauer’s pivotal Operation: Nightfall mission are revealed here!