an issue of Damage Control (2022) by Marvel Comics 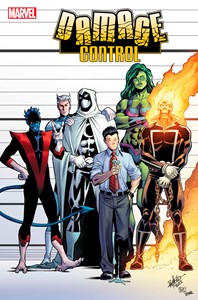 Issue description
Writer: Adam F. Goldberg Hans Rodionoff
Artist: Jay Fosgitt
Marvel's Unsung Heroes finally get sung! After the mega-powered battles and Hulk-level catastrophes, Damage Control is always there to clean up the mess and get things back to normal. But Damage Control is much more than just a glorified cleanup crew, and this new series will pull back the curtain and reveal the secret inner workings that were previously only available to people with Clearance Level Eight. And we'll witness it all through the eyes of Gus: a fresh-faced, eager newcomer to the company who has no idea how chaotic his life is about to become.

Plus: A second story by DAMAGE CONTROL creator Dwayne McDuffie's McSpouse, Charlotte Fullerton, as the Damage Control crew must clean up after the Infinity Gauntlet!