an issue of Captain Carter by Marvel Comics 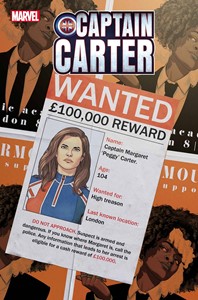 CAPTAIN CARTER ON THE RUN! Peggy and her dwindling list of allies just became prime targets for a sinister group operating at the highest levels of British society. Before she was Captain Carter, Peggy was Agent Carter-but can she rely on decades-old spy training to keep her alive in the modern world?