an issue of Detective Comics (2016) by DC Comics 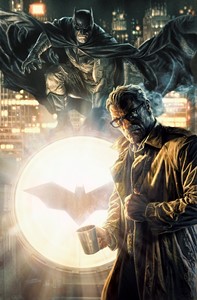 Issue description
Writer: Matthew Rosenberg Mariko Tamaki
Artist: Fernando Blanco Amancay Nahuelpan
Batman is back! And just in time to save the life of Nightwing, who was given a fear toxin super-dose and tossed out of a skyscraper-another tragedy surrounding Arkham Tower's hostile takeover. As Scarecrow readies his forces for the big bat, war erupts on every floor of the building between the Penguin's thugs, the Party Crashers, the murderous Arkham inmates, and an overwhelmed Bat-Family who's struggling to get everyone out alive! Will the return of the bat be enough to turn the tide to victory...or does another X factor lurk in the battle that could save the day? The penultimate chapter of "House of Gotham" arrives as a battle erupts between Batman, The Joker, and the Boy in horrifying fashion! Bruce Wayne has felt responsibility for this situation for years now...but does he have what it takes to save the life of his sworn enemy?