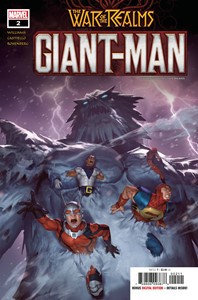 Issue description
Writer: Leah Williams
Artist: Marco Castiello
WAR OF THE REALMS TIE-IN! ON THE SHOULDERS OF GIANTS! Four of the biggest men in the Marvel Universe are on a mission in Frost Giant territory: kill the patriarch of all Frost Giants himself, Ymir, on behalf of Lady Freyja. But how exactly will they penetrate Laufey's forces? By becoming masters of disguise! Rated T