an issue of Angel: Old Friends by IDW Publishing 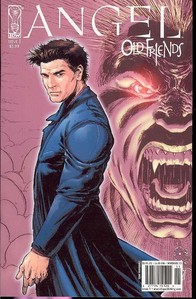 Issue not yet rated - You rated this a 0
Previous Issue Next Issue
Covers of Angel: Old Friends #1

Issue description
Writer: Jeff Mariotte David Messina
Joss Whedon’s classic character returns for his next all-new adventure! When a strangely familiar, seemingly vampiric figure is spotted killing victims in Los Angeles, Angel, alone in semi-retired retreat while he figures out what's next for him, is lured back to the city to put a stop to the string of slayings. The case will reunite the vampire with a soul with old friends and old enemies–but it's impossible to tell which is which! Written by Angel novelist and comics writer Jeff Mariotte (Angel: The Curse, Desperadoes: Banners of Gold) with full art and colors once again provided by David Messina (Angel: The Curse). If you’ve been waiting to see Angel’s supporting cast join him on a new comic book adventure, this one’s for you.