Britannia: We Who Are About to Die #4 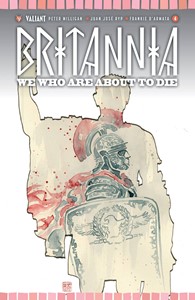 Issue not yet rated - You rated this a 0
Previous Issue Next Issue
Covers of Britannia: We Who Are About to Die #4

Issue description
Writer: Peter Milligan
Artist: Juan Jose Ryp
Death and the deity! The horrifying truth behind Rome's grisly string of murders has finally come to light... but will Antonius Axia and his mysterious new partner - the gladiator Achillia - be able to stomach it? It's a race against the clock to stop a serial killer - who may very well be the vengeful spirit of Apollo himself - before it strikes again! But should Antonius and Achillia fail in their mission, they'll condemn not only Rome...but those Antonius holds dear as well.