an issue of Equilibrium by American Mythology 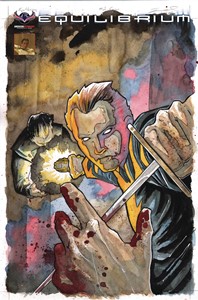 Issue description
Writer: Patrick Shand
Artist: Jason Craig
Libria's wayward son, the mysterious John Preston, has returned to the city he once liberated. However, instead of seeing rebels fighting back against the totalitarian government that Preston once toppled, he sees a city that is even more fractured than when he left. Now, armed with the knowledge of the Tetragrammaton's secret weapon, Preston gathers forces to arm himself against the army he once led. Spinning out of the cult classic film Equilibrium comes this brand new action-packed comic from Pat Shand (Vampire Emmy and the Garbage Girl, Iron Man) and Jason Craig (Freddy vs. Jason vs. Ash, Evil Ernie).