an issue of Army of Darkness by Dynamite Entertainment 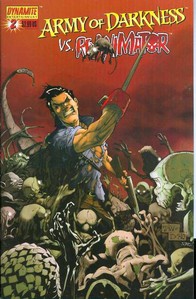 Issue description
Writer: Sanford Greene James Kuhoric
The ultimate war continues! Locked in an insane asylum, surrounded by re-animated abominations, and low on gas, Ash leads a misfit band of wannabe heroes into the depths of a Deadite-infested madhouse. Facing an entire wing of undead inmates, Ash must uncover the Necronomicon and send the evil spirits back before the gateway to the Old Ones is opened, ushering in the destruction of the human race! It’s Cthulhu meets "Chin- Fu" as everyone’s favorite one-handed, wisecracking anti-hero discovers that there are worse things than Deadites detailed in the blood-soaked pages of the Book of the Dead! Can Ash uncover the book and save the day before the "Chosen One" flies over the cuckoo's nest?!