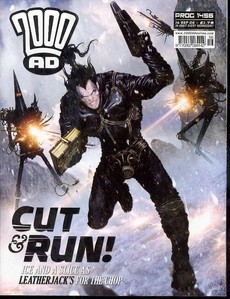 NM Price:
$4.10
Release Date:
10/19/2005
Issue not yet rated - You rated this a 0
Previous Issue Next Issue
Issue description
Hard-edged sci-fi and acerbic satire from Britain's all-action weekly anthology title! Nate Slaughterhouse is a man pushed to the edge in Judge Dredd by John Wagner and Kev Walker. There are droids amok and only Robo-Hunter Samantha Slade can save the day in Stim! by Alan Grant and Ian Gibson. Freedom fighter Bill Savage attempts to assassinate the Volgon leader in Out of Order by Pat Mills and Charlie Adlard. Hired killer Leatherjack goes on the run, courtesy of John Smith and Paul Marshall. And finally, the net closes on the Earth Murderer in Breathing Space by Rob Williams, Laurence Campbell, and Peter Doherty!