an issue of Star Wars: Clone Wars Magazine by Other Manufacturer 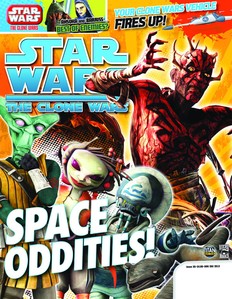 NM Price:
$4.99
Release Date:
11/27/2013
Issue not yet rated - You rated this a 0
Previous Issue Next Issue
Issue description
Patitites, Anacondans, Belugans, Terellian Jango Jumpers... over the course of its five seasons Star Wars: The Clone Wars has expanded the ranks of Star Wars' alien species like never before, so this issue we're celebrating the most weird, wonderful and downright bizarre aliens the galaxy has to offer! Plus, we've got two awesome comic strips that see the Jedi take the fight to the Separatists on the explosive remains of a dying planet and the début of your winning Clone Wars vehicle (under the command of a brand-new bounty hunter!), and more puzzles and posters than there are planets in the Core Worlds!