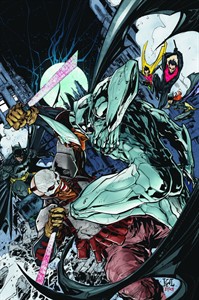 NM Price:
$2.99
Release Date:
4/4/2012
Issue not yet rated - You rated this a 0
Previous Issue Next Issue
Issue description
Writer: Judd Winick
Artist: Chriscross
Batwing vs. Massacre! The culmination of Massacre's rampage and destruction of Africa's first team of heroes, The Kingdom! The battle between Batwing and Massacre crashes Gotham City as Batman, Robin, Batgirl and Nightwing join the fight in a massive, action-packed rumble you won't want to miss! And the shocking identity of Massacre is revealed at last!