a cover of issue #1 of True Blood by IDW Publishing 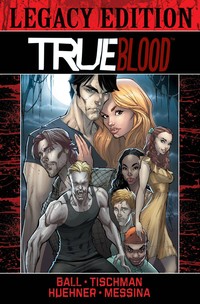 NM Price:
$4.99
Release Date:
1/5/2011
Issue not yet rated - You rated this a 0
Previous Issue Next Issue
View all 12 covers
Issue description
Writer: David Messina Rich Perotta David Tischman
Alan Ball's hit HBO series, the sensually sizzling story of the lives and loves of vampires, mind readers, and all manner of creature, comes to IDW! Blood and sex mix on a hot rainy night at Merlotte's, when Sookie and her friends are trapped by a vengeful spirit who feeds on shame. People die and dirty secrets are revealed as Sookie, Bill, Eric, Sam, Tara, Jason, and Lafayette and are all coerced to dig deep and tell painful memories from their past-those things we all have locked within us that we never tell another living soul! Bon Temps, Louisiana has never been stranger, or more twisted, in a story co-plotted by True Blood series creator Alan Ball, with a script by David Tischman (Bite Club) and Mariah Huehner, and lush art by David Messina (Star Trek: Countdown). Bonus inside every issue: an exclusive pullout gatefold poster by David Messina!

True Blood was the only TV show in the top-selling DVDs of 2009!