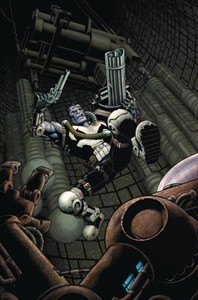 NM Price:
$2.99
Release Date:
1/27/2010
Issue not yet rated - You rated this a 0
Previous Issue Next Issue
Issue description
Writer: Tony Moore Rick Remender
'FRANKEN-CASTLE,' PART 3 Trapped in the dank tunnels under New York, surrounded by a savage team of Japanese monster hunters, filthy in the blood of his friends, Frank Castle turns, lifts a giant rifle and smiles. They aren't prepared for this, you aren't prepared for this, an entire issue loaded full, completely dedicated to bleeding, sweet, revenge-splattered murder in traditional hardcore Punisher style. Frank's been through hell -- time to give a little back.