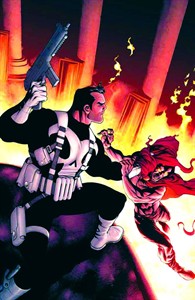 NM Price:
$2.99
Release Date:
10/28/2009
Issue not yet rated - You rated this a 0
Previous Issue Next Issue
View all 2 covers
Issue description
Writer: Tan Eng Huat Rick Remender
'DEAD END,' Part 5-Finally! It's the Punisher vs. the Hood! The new kingpin of crime has torn Frank's world down around him, now he twists the knife embedded in Frank Castle's chest in an act so cruel, so malicious, it'll go down in the history of villainy. The gloves are off and anything goes in this sadistic face-off as Frank Castle and Parker Robbins attempt to kill each other by tearing each other's souls apart. How much will Frank compromise to punish the guilty? There are worse things you can do to a person than kill him. Much worse.