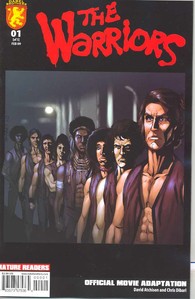 Issue not yet rated - You rated this a 0
Previous Issue Next Issue
View all 3 covers
Issue description
Writer: David Atchison Diego Bernard Chris Dibari
2009 marks the 30th-Anniversary of Walter Hill's cult classic film, The Warriors, based on Sol Yurick's novel. 2009 also marks the year when the Dabel Brothers adapt the movie to comic book form for the first time ever! Dabel Brothers Productions are making the film-to-comic translation as close as possible, and capturing the spirit of the movie, while at the same time adding some effects that can only be added in comic book form - in effect celebrating pop culture with a cult classic.

The Warriors Official Movie Adaptation is something that fans and non-fans alike are sure to dig! In this issue The Warriors are framed for killing Cyrus, a rival gang leader who had been trying to unite all the gangs in the area. With other gangs gunning for them, they must get back to their home turf of Coney Island alive!

Available with a regular cover from Erik Jones and a PREVIEWS Exclusive cover from Chris Dibari.