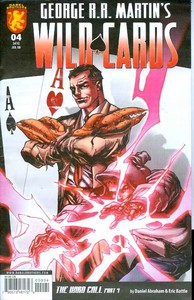 In the world of Wild Cards, not all Aces can be trusted, and Alex is nervous about his new alliance with the paranoid amphetamine addict Croyd Crenson, better known as 'The Sleeper.' After all, as the old Jokertown rhyme goes, 'Sleeper speeding, people bleeding.' But Crenson's unpredictable behavior is the least of Alex's worries, as he blows off his friend Simon, spurring his former classmate to begin a quest of his own. Now both Alex and Simon are searching for their missing friend Kyria - but neither truly understands how dangerous it will be! What does all of this have to do with the Dog Mask serial killer? The killer's identity is surprise enough, but the purpose behind the killings is nothing short of shocking!