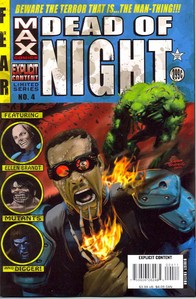 Issue not yet rated - You rated this a 0
Previous Issue Next Issue
Issue description
Writer: Roberto Aguirre-Sacasa Nic Klein
For every action, there is an equal and opposite reaction. Once, scientist Ted Sallis and Ellen Brandt were lovers. Now, they have both been transformed: Ted into the monstrous Man-Thing; Ellen into a disfigured mockery of her former self, her face seared in an act of vengeance. Now she's returned to Citrusville with a team of terrorist mercenaries, looking for payback. Her mission: To kill the Man-Thing, no matter what it takes. Even allied with witch-woman Jennifer Kale, what chance does the Man-Thing have of surviving? This radical re-imagining of Marvel's premier horror icon concludes this issue! (And yes, Digger's narrating this one, too!)