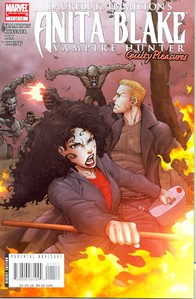 NM Price:
$2.99
Release Date:
5/14/2008
Issue not yet rated - You rated this a 0
Previous Issue Next Issue
Issue description
Writer: Ron Lim Jess Ruffner
Things really heat up this month for Laurell K. Hamilton's Anita Blake as she deals with last issue's revelation. Now that she knows who's behind the recent spate of illegal vampire slayings, she just has to keep from getting torn apart by an army of ghouls! Caught between the deadly vampires she's paid to kill, the vicious murderer whose been brutalizing them, and a psychopathic vigilante, you'll never believe where things will lead in this pulse-pounding issue adapting the best-selling novel 'Guilty Pleasures.'