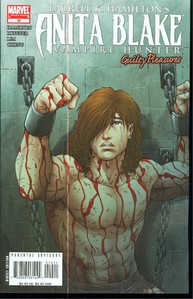 NM Price:
$2.99
Release Date:
4/2/2008
Issue not yet rated - You rated this a 0
Previous Issue Next Issue
Issue description
Writer: Ron Lim Jess Ruffner
Things keep getting worse for Laurell K. Hamilton's deadly vampire hunter as one of her allies in the hunt for the vampire killer is murdered! But vampire bites, ominous dreams, and persistent sociopaths won't slow Anita down as she takes matters into her own hands and learns the truth about the mystery that's been plaguing her: the identity of the perpetrator of the brutal and unlicensed slayings of 'innocent' vampire citizens! Of course, having that knowledge doesn't mean she'll live long enough to share it! The adaptation of the best-selling novel continues here!