an issue of Becoming Frankenstein by 10 Ton Press 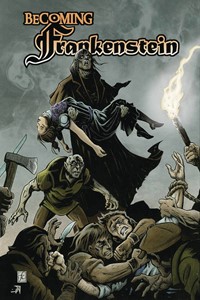 Cover Price:
$3.99
Release Date:
Late
Issue not yet released
Previous Issue Next Issue
Issue description
Writer: Paul H. Birch Mel Smith
Artist: Frank Cirocco
We find Henry Clerval returning from exile only to find Ingolstadt up in arms. With so many prominent townsfolk now either dead or vanished, the superstitious point a finger towards Victor Frankenstein... Like Prometheus, he has stolen fire from the gods, and his corpse-flesh of many now walks the earth as something resembling man. Frankenstein refuses to see his great achievement destroyed, and is prepared to lose all he held dear in his maddening pursuit of science... With chaotic twists and turns, this tale of love, friendships, betrayals, murder, and medicine most macabre reaches its bitter climax.