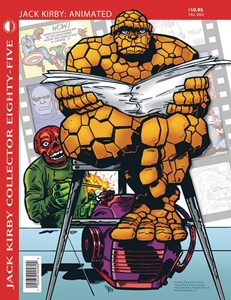 NM Price:
$10.95
Release Date:
1/11/2023
Issue not yet rated - You rated this a 0
Previous Issue Next Issue
Issue description
Jack Kirby Collector #85 brings to life "Kirby: Animated", detailing how Kirby and his concepts leaped from celluloid, to paper, and back again! From his 1930s start on Popeye and Betty Boop and his work being used on the 1960s Marvel Super-Heroes show, to Fantastic Four (in both 1967 and 1978), Super Friends/Super Powers, Scooby-Doo, Thundarr the Barbarian, and Ruby-Spears: it's the ultimate look at Jack's work in, and influence on, animation! Then comics and animation's Evan Dorkin talks about his Kirby inspirations and an abandoned Kamandi animated series. Plus our regular columnists, and from 2017's Baltimore Comic-Con: Mark Evanier celebrates Kirby's 100th birthday with Tom King, Walter Simonson, Mark Buckingham, Jerry Ordway, Dean Haspiel, John K. Snyder III, and the Kirby Museum's Rand Hoppe.