an issue of Abolition of Man by Living the Line 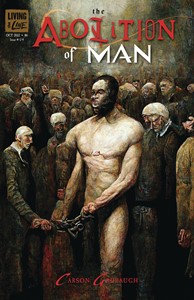 Issue not yet released
Previous Issue Next Issue
Issue description
Writer: Carson Grubaugh
Artist: Carson Grubaugh
What do you get when you take a groundbreaking philosophical essay by C.S. Lewis and feed it into an AI image generator, one line at a time? The world's first (and only) entirely-computer generated comic book, The Abolition of Man issue #1, by oil painter turned Eisner-nominated cartoonist Carson Grubaugh (Strange Death of Alex Raymond). Alternately hilarious and terrifying, Abolition gives a chilling peek into the world of the future, where humans and their most treasured passions have lost all purpose.