an issue of Transformers Timelines by Fun Publications 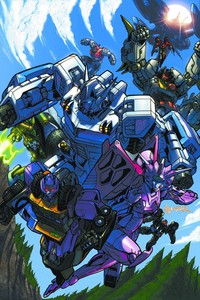 NM Price:
$4.95
Release Date:
7/18/2007
Issue not yet rated - You rated this a 0
Previous Issue Next Issue
Issue description
Writer: Forest Lee Alex Milne
It has been 15 years since Optimus Prime and his Autobot warriors finally defeated the Decepticons, or so they had hoped. Megatron, thought to have been destroyed after crashing back into Earth aboard the Autobots ship the Ark, has once again found his way back from the brink of destruction. This time he will stop at nothing to fulfill his vision of conquest. From across the galaxy a group of Autobots head to Earth looking for the Decepticon threat, but are they here for Megatron or someone else entirely. A story set in the Transformers comic timeline that started it all. An exciting adventure for all fans, this summer, readers will experience the most popular characters in Transformers history, The Transformers Classics! Included are two all new profiles and bonus content for the Diamond release.