an issue of Aliengaged by Literati Press 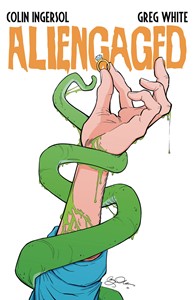 Issue not yet rated - You rated this a 0
Previous Issue Next Issue
Issue description
Writer: Colin Ingersol Greg White
Artist: Greg White
As an alien attack rampages the city, Garrett accepts that his time has finally come. It's the end of life as he knows it... as a single man, that is. Blinded by love, Garrett is blissfully unaware of his apocalyptic surroundings as he strolls through the mania to pop the question to his girlfriend, Claire. Meanwhile, Garrett's best friend, Morris, races through the city to save them both.