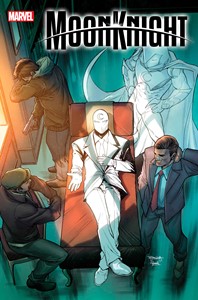 NM Price:
$3.99
Release Date:
8/3/2022
Issue not yet rated - You rated this a 0
Previous Issue Next Issue
View all 2 covers
Issue description
Writer: Jed MacKay
Artist: Alessandro Cappuccio
The scars of Zodiac's attack linger with the faithful of the Midnight Mission, but that doesn't stop Moon Knight from picking an entirely new fight. A new arc begins as Moon Knight goes to war with the vampires of the Structure, but he finds it a battle on two fronts - one on the midnight streets, and the other within his own mind!