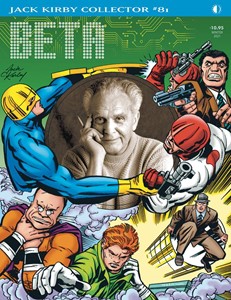 NM Price:
$10.95
Release Date:
4/13/2022
Issue not yet rated - You rated this a 0
Previous Issue Next Issue
Issue description
Peer into comics most prodigious imagination in the "Beta" issue of the Jack Kirby Collector! We'll take a tour of his wildest, most experimental ideas, characters, and series, from the unhinged lunacy of Fighting American, to the non-stop inventiveness of Jimmy Olsen! There's an interview with Jack himself, a look at Kirby's inspirations for the "secret societies" that permeated his work (from The Project and Habitat to Wakanda and the Night People), the failed genius behind Kamandi's "UFO Saga," the many non-superhero genres the King explored during his career, and more! Plus there's Mark Evanier's Kirby Tribute Panel from the 2019 Heroes Con (with Mike Royer, Jim Amash, and Rand Hoppe), a pencil art gallery, and our cover featuring Kirby's unused illo for Superman's Pal Jimmy Olsen #141, inked by Vince Colletta!