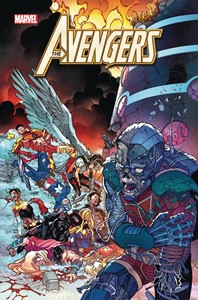 NM Price:
$3.99
Release Date:
3/16/2022
2 ratings - You rated this a 0
Previous Issue Next Issue
View all 5 covers
Issue description
Writer: Jason Aaron
Artist: Juan Frigeri
THE DEATH HUNT CONCLUDES! Doctor Doom and his Multiversal Masters of Evil have come hunting Deathloks. And now there's only one Deathlok left, trapped inside the rubble of a besieged Avengers Mountain. Just in time for a new group of Avengers to rise from the ruins, with new members and at least one Avenger having been wildly transformed. And just who is the cosmic general who commands the Deathloks, the mysterious Avenger Prime?