a cover of issue #10 of Silver Coin by Image Comics 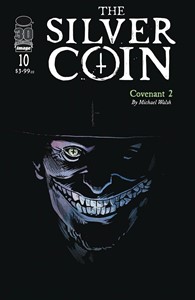 Issue not yet rated - You rated this a 0
Previous Issue Next Issue
View all 2 covers
Issue description
Writer: Michael Walsh
Artist: Michael Walsh
Next in THE SILVER COIN, the hit horror anthology from VITA AYALA, JOSHUA WILLIAMSON, RAM V, MATTHEW ROSENBERG, and MICHAEL WALSH, comes a sequel 300 years in the making. Audrey is a high schooler with an unusual ability who's drawn to the occult. When she encounters the coin, she conducts a ritual meant to break its curse but instead summons something darker still. The coin's mystery deepens in part two of "Covenant."