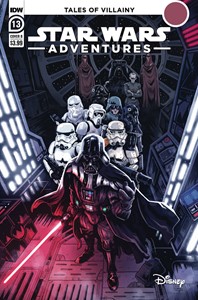 NM Price:
$3.99
Release Date:
12/29/2021
Issue not yet rated - You rated this a 0
Previous Issue Next Issue
View all 3 covers
Issue description
Writer: George Mann
Artist: Butch K. Mapa
First, from author George Mann (Doctor Who), the Millennium Falcon needs some serious repairs after sitting in disrepair on Jakku. So Rey, Chewie, Finn, and BB-8 have to make a pit stop. But it doesn't quite go as planned (it never does), and the group quickly finds themselves at the wrong end of a bounty hunter's blaster.

Then, in a bone-chilling tale from author Danny Lore (Transformers: Shattered Glass, King in Black: Captain America), Darth Vader searches a temple for a hidden tome and nothing-nobody-will stop his wrath.