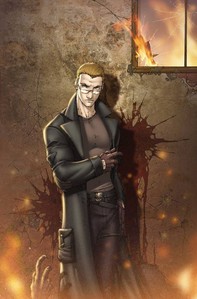 NM Price:
$2.99
Release Date:
4/18/2007
2 ratings - You rated this a 0
Previous Issue Next Issue
Issue description
Writer: Brett Booth Laurell K. Hamilton Stacie M. Ritchie
Anita Blake has a major dilemma – she’s known professionally as a vampire hunter, but she has been recruited to help track down a serial killer who has been preying upon the vampire population of St. Louis. To break the case, she’ll need the help of Phillip, a junkie who is addicted to being preyed upon by vampires, and she’ll have to attend a freak party, where vampires and humans come together for a strange evening of pleasure and pain… Adapted from the novel by New York Times Best-Selling author Laurell K. Hamilton, ANITA BLAKE: VAMPIRE HUNTER in GUILTY PLEASURES takes readers on a dark adventure through the underworld of an alternate reality where vampires, werewolves, and other supernatural creatures are legal citizens of the United States. Find out why this series has been called “the surprise hit of 2006!” by fans and critics alike!