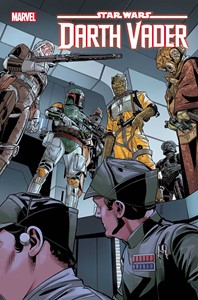 NM Price:
$3.99
Release Date:
11/11/2020
Issue not yet rated - You rated this a 0
Previous Issue Next Issue
View all 3 covers
Issue description
Writer: Greg Pak
Artist: Raffaele Ienco
PAIN LEADS TO ANGER AND ANGER LEADS TO AN ELEMENT FROM EPISODE IX! As DARTH VADER battered and broken by the EMPEROR as punishment for his rebellion, drags himself across the blasted surface of MUSTAFAR with vengeance on his mind! But can he survive the onslaught of a certain mysterious SITH ASSASSIN? And how will his world change when he learns his enemy's GREATEST SECRET?! Rated T