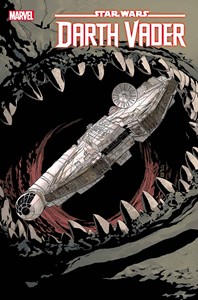 Cover Price:
$3.99
Release Date:
10/14/2020
Issue not yet released
Previous Issue Next Issue
View all 2 covers
Issue description
Writer: Greg Pak
Artist: Raffaele Ienco
THE PUNISHMENT! DARTH VADER failed to turn his son, Luke Skywalker, to the dark side of the Force. No...Luke was too weak to join his father in overthrowing EMPEROR PALPATINE. Vader sought revenge against those who hid Luke from him for all of these years...and in doing so nearly betrayed his master. It did not go unnoticed by Palpatine... time for Vader's next lesson. Rated T