an issue of Assassin's Creed: Valhalla - Song of Glory by Dark Horse 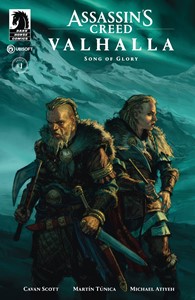 NM Price:
$3.99
Release Date:
10/21/2020
Issue not yet rated - You rated this a 0
Previous Issue Next Issue
Issue description
Writer: Cavan Scott
Artist: Martin Tunica
Blades clash in this prequel to Ubisoft's next hit video game, Assassin's Creed Valhalla. Norway. Mid-9th century CE. Eivor, a Viking warrior, observes a village raided by a neighboring kingdom. Bloodshed and mayhem erupt as she seizes the attack in her own favor-but will her victory be a blessing to her clan or a terrible curse? Elsewhere, another Viking searches for a different kind of prize, one of crucible steel . . .