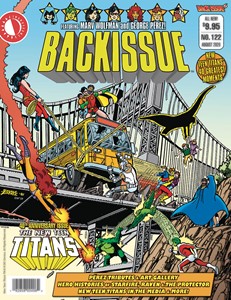 NM Price:
$9.95
Release Date:
10/14/2020
Issue not yet rated - You rated this a 0
Previous Issue Next Issue
Issue description
Writer: Various
Back Issue celebrates the 40th anniversary of Marv Wolfman and George Pérez's New Teen Titans, featuring a guest editorial by Wolfman and a Pérez tribute and art gallery! Plus: The New Teen Titans' 40 Greatest Moments, the Titans in the media, hero histories of Raven, Starfire, and the Protector, and more! With a never-before-published Pérez Titans cover from 1981.