a cover of issue #4 of Ragnarok: The Breaking of Helheim by IDW Publishing 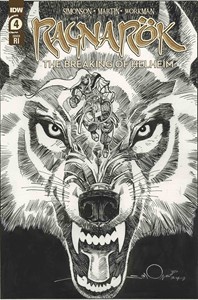 NM Price:
$4.99
Release Date:
3/4/2020
Issue not yet rated - You rated this a 0
Previous Issue Next Issue
View all 2 covers
Issue description
Writer: Walter Simonson
Artist: Walter Simonson
As Thor travels deeper into the monstrous canyons of Helheim, he encounters a wild pack of ferocious wolves, larger than any he has seen before. They bear him a terrible grudge and reveal a hitherto unknown secret of the final battle between the gods and their enemies, a secret that has stretched across the centuries since the fall of the gods. And it could spell death-the real death-for Thor.