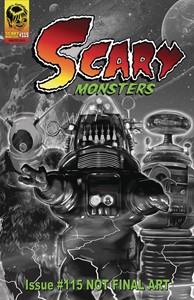 NM Price:
$9.95
Release Date:
11/27/2019
Issue not yet rated - You rated this a 0
Previous Issue Next Issue
Issue description
Scary Monsters highlights classic monster and sci-fi films of the 1940s to 1980s. It's the return of the revolting robots, angry automatons, and malicious mechanical men that threatened our world, as well as the rambunctious yet reliable robots that served mankind to ward off evil. They're all here, including Gort, Robby the Robot, Lost in Space's B-9, Gog, Tobor the Great, Mechagodzilla, Terminator, and more! We talk to writer/director Aldo Lado of The Humanoid and profile screenwriter Jay Simms of The Creation of the Humanoids. Plus, Dr. Gangrene's Mad Interviews, Trilogy of Terror, Kaiju Korner, Strange Days, Weird USA, and much more!