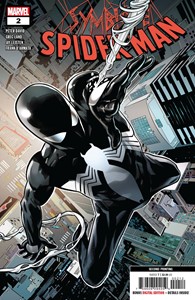 NM Price:
$3.99
Release Date:
6/12/2019
1 rating - You rated this a 0
Previous Issue Next Issue
View all 5 covers
Issue description
Writer: Peter David
Artist: Greg Land
Set during the original ALIEN COSTUME SAGA - before Peter learned of the symbiote suit's true nature - comes the second installment of this all-new tale from comic legends Peter David and Greg Land! Mysterio, after swallowing another loss against Spider-Man, has sworn vengeance upon the web-slinger! Recruiting another villain to to enlisting the aid of an impressionable hollywood stuntman to take on Spider-Man, Mysterio is dead set on ending Web-Head once and for all! However, the symbiote suit isn't willing to give up its host without a fight... Rated T