a cover of issue #1 of Star Wars: Age of Rebellion - Darth Vader by Marvel Comics 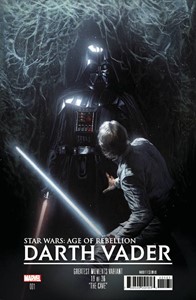 NM Price:
$3.99
Release Date:
6/26/2019
Issue not yet rated - You rated this a 0
Crossovers
Star Wars: Age of Rebellion
Previous Issue Next Issue
View all 6 covers
Issue description
Writer: Greg Pak
Artist: Marc Laming
YOUR HUMBLE SERVANT VADER! DARTH VADER may be the most feared man in the galaxy. But to the proud Grand Moffs of THE EMPIRE, he's just the Emperor's apprentice - below them in the hierarchy. But what fury burns in the heart of a SITH with such overwhelming rage when a mere Moff dares command him? And at what point does Darth Vader show them his true power? Rated T