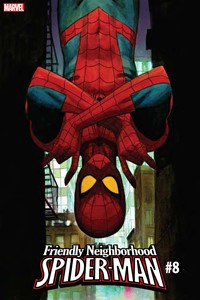 NM Price:
$3.99
Release Date:
6/26/2019
Issue not yet rated - You rated this a 0
Previous Issue Next Issue
View all 2 covers
Issue description
Writer: Tom Taylor
Artist: Ken Lashley
When things go nuts at the F.E.A.S.T. Center, it leaves Aunt May FURIOUS, and no one rests when Aunt May is angry. So Spider-Man has to kick an investigation into high gear into the Prowler and what he's up to! Peter has a lot of skills, but he is no Sherlock Holmes. The World's Worst Detective calls on his new ally the Rumor to help him! Rated T