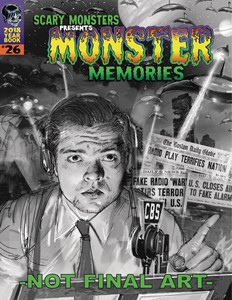 NM Price:
$10.95
Release Date:
3/7/2018
Issue not yet rated - You rated this a 0
Previous Issue Next Issue
Issue description
Scary Monsters carries on the 26-year tradition of issuing a yearbook of all new, all scary material! The Monster Memories Yearbook #26 for 2018 is jam-packed with nostalgic reflections of the classic films, monsters, creatures, actors, directors and stories that influenced us as kids and still do today. We'll celebrate the 80th anniversary of Orson Welles' terrifyingly believable and influential War of the Worlds radio broadcast. We'll pay a visit to the sand pits of Horsell Common, the site of the first Martian landing in H.G. Wells' classic novel, and we'll pay homage to the 1953 classic film starring Gene Barry on its 65th anniversary - and much more!.