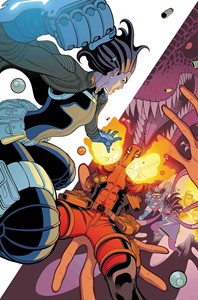 NM Price:
$3.99
Release Date:
9/13/2017
Issue not yet rated - You rated this a 0
Crossovers
Secret Empire
Previous Issue Next Issue
Issue description
Writer: Matthew Rosenberg
Artist: Juanan Ramirez
THE SECRET EMPIRE HAS FALLEN - AND NOW IT'S DEADPOOL'S TURN. During the Hydra takeover, Deadpo6ol killed Agent Phil Coulson, Quake's mentor and close friend. So now Quake is going to kill Deadpool. But not if the rest of the Secret Warriors have anything to say about it! (I mean, Devil Dinosaur could kinda go either way. Also he can't speak.)